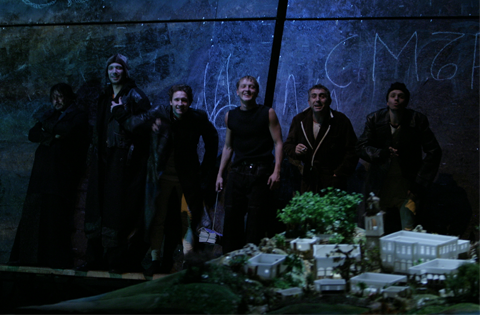 Author: After the novel Nemili-nedragi by Ivan Vazov

The Bulgarian classical author Ivan Vazov wrote the play “Hashove” in 1894 as a dramatization of his novel “Nemili nedragi” and it was immediately put on stage by the troupe that later would found the National Theatre. Now in its 100th jubilee season The National Theatre offers a contemporary interpretation of the theme of the Bulgarian revolutionary emigration before the liberation of the country in the Russian-Turkish war. It is made by Alexander Morfov (“Don Quixote”, “The Tempest”, “The Lower Depths”, “Decameron”), who has been celebrated for his original iconoclastic approach towards classics and the prolific vision of his performances.
“Hashove” won the Union of Bulgarian Actors’s award (UBA) 2005 for best direction and technical execution, and “Askeer” 2005 for best actor in a leading role (Valery Jordanov), best direction and best performance, and is nominated for best design.

Long ago I felt that “Nemili-nedragi” is a text that I could not resist. There is everything in it… If I and the actors have to say something to our contemporaries .., it’s just, that it is worth to have ideals in your life.
Alexander Morfov in an interview for “Standart” Newspaper

This staging marks a superb achievement of its director on Bulgarian stage in his skill to draw a canonic text out of the interpretative network it has diffused with and show it through the optics of the contemporary consciousness according to its visual habits’ demands and its anxieties.
Angelina Georgieva “Literaturen vestnik” newspaper

The tour is realized with the support of National Fund “Kultura”