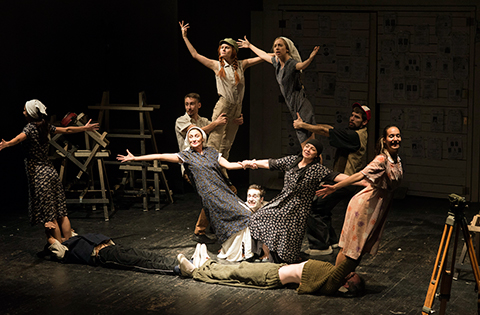 Based on texts by Yordan Radichkov

Theatre Laboratory “Sfumato” was founded in 1989 by directors Margarita Mladenova and Ivan Dobchev and it has established a unique style that has brought them international recognition. It understands itself as a territory for exploring the language of theatre and develops thematic programs that delve into the worlds of emblematic authors. Margarita Mladenova and Ivan Dobchev dedicate their latest programme to one of the most significant and original Bulgarian novelists and playwrights of the second half of the 20th century – Yordan Radichkov. They draw on his mythopoeic works deeply rooted in Bulgarian folklore and traditional beliefs as a testimonial of a world that becomes extinct. Each of the productions is marked by the distinguished style of its director. They are united by the question of the dynamics between the local and the global and ask how to be open to the Other without losing your own identity.

The actors in “Herbs of Madness” recreate on stage some characters from different short-stories of Radichkov with exceptional vividness and rich theatrical acting as if to bring them together and board them onto a Noah’s Ark. 25 years after the first version of Margarita Mladenova’s staging of the same name, the performance this time sounds as a reminder of the living bond with the natural and the magical that is to be protected as an intransient value.