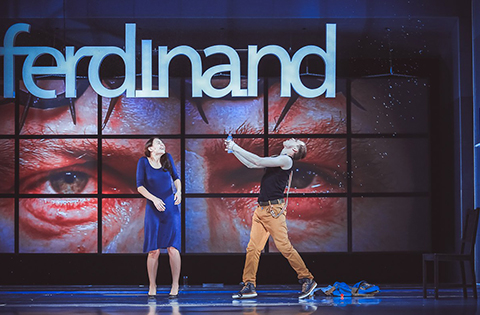 Director Timofey Kulyabin has not only reduced the name of Frederich Schiller’s drama to its Russian acronym “КИЛ” , but also the play itself. What was a melodramatic tale is now an exploration of hidden undeclared feelings which the director plumbs with subtle shifts in set design, music, lighting and hushed murmured prayers. The characters discuss love in dispassionate, quiet voices, remembering that declarations of love are indecent. “Kill”, then is not so much about the murder of Louise, but about the murder of love, and therefore of God himself, who is love. Filmed before a live audience from the Red Torch Theatre in Novosibirsk, Russia.

Timofey Kulyabin is one of the most prominent young directors in Russia today. He has already staged nearly two dozen productions across the Russian Federation as well as internationally in, among many, France, Austria, Romania, Germany, Switzerland and the United States. In 2016, he was commissioned by Moscow’s Bolshoi Theatre to stage Donizetti’s opera “Don Pasquale” and in 2019 returned to the great theatre, offering up a new staging there of Dvořák’s opera “Rusalka”.

In Russian with English subtitles.