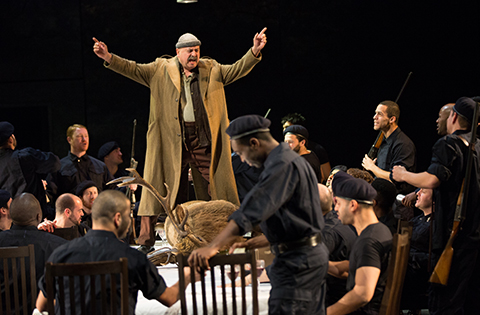 An aged king decides to divide his kingdom between his three daughters, according to which of them is most eloquent in praising him. His favourite, Cordelia, says nothing. Lear’s world descends into chaos. The film and theatre director Sam Mendes (James Bond: Skyfall, American Beauty), an Academy Award winner, returns to the National Theatre to direct Simon Russell Beale (Timon of Athens, Collaborators) in the title role of Shakespeare’s tragedy. „For close to a quarter of a century, the pair have brought out the best in one another… The staging is a powerfully searching account of the tragedy that fuses the familial and the cosmic, the epic and the intimate, and ponders every detail of the play with a fresh, imaginative rigour… Mendes has set the piece in a present day totalitarian state. Russell Beale’s Lear is an old Stalinesque despot, surrounded by a huge armed guard, and the love-test of his daughters is a chilling public ceremony, with microphones, designed to prop up his ego before he delegates power… Cordelia’s refusal to play the game sounds like a principled protest against a regime based on conformism and flattery…” (Paul Taylor, The Independent) National Theatre Live is the National Theatre’s groundbreaking project to broadcast the best of British theatre live from the London stage to cinemas across the UK and around the world. With the help of satellites the theatre productions reach more than 1.5 million spectators in 700 cinemas.