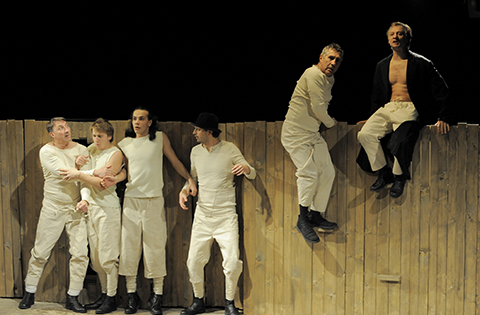 KNIGHT OF THE HOLY SPIRIT

True to his uncommon genre forms Boyan Papazov characterizes his play Knight of the Holy Spirit as an “alcohol-induced hallucinosis”. In a state of alcohol-induced delirium Filyo Gologana invokes the ghost of his friend, Aleko Konstantinov, a lawyer and writer who was murdered in 1897 while travelling in a coach with Mihail Takev, also a lawyer. In a carnival mood, with exceptional language play and actors’ plasticity the performance recreates the trial at which Aleko appearing as a Noble Spirit paradoxically defends his murderers. A performance about national heroes and ideals, about the state of the spirit in the past and today.