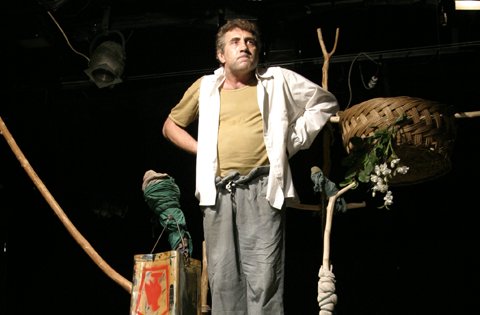 The ingenious and unusual plot of “Lazaritza” makes out of the play one of the most beautiful and poetic texts in Bulgarian drama. Lazar takes his dog to the forest and binds it to a pear tree with the intention to shoot it. But the bad shot turns the situation upside down. Lazar finds himself on the tree and the rabid dog – under it. And this goes on, till all the seasons of a human life slip by. The director Krikor Azaryan once again (after “January” and “An Attempt of Flying”) turns to the full of metaphors and parables world of Radichkov, and creates a unique performance that for first time brings out on the stage the “imaginary Dog”. For his role of Lazar Valentin Tanev wins the UBA’s 2005 award for best actor in a monoperformance, and Malin Krastev in the part of the Dog, wins “Askeer” 2005 for best actor in a supporting role.

I’ve always had the feeling that this play is polyphonic… It was already clear to me, that there must be a Dog. I mean an actor to play the role of the Dog. I also understood, that he should not imitate a dog, but should stand for the “otherness” in man…
Krikor Azaryan for “Programata” Magazine