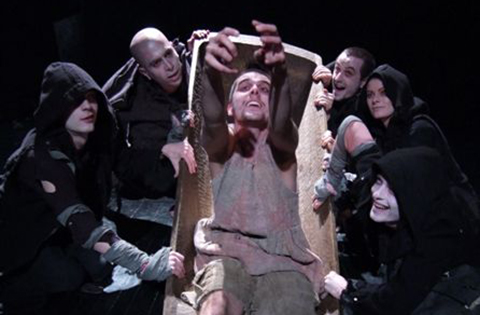 after Emilian Stanev
a performance by Ivan Dobchev

Theatre directors Ivan Dobchev and Margarita Mladenova found Theatre Laboratory Sfumato as a territory for theatre research. Lazaurs and Jesus is a part of their ongoing interest in the Archetypes program in the forgotten/forbidden texts and in finding their corresponsive theatrical poetics. A key performance in this direction was Apocrypha in 1997, based on authentic ancient apocryphal texts.

The performance Lazarus and Jesus is based on the short novel of the same name from 1977 written by Emilian Stanev (1907 – 1979), whose anniversary is celebrated by UNESCO. The author himself describes it as an apocrypha. It retells the biblical story of Lazarus’s  resurrection by Jesus but deviates from the orthodox version according to which the resurrected Lazarus is a  precursor of Jesus’ resurrection and  of the blessed dead who on Judgement Day will see the Kingdom of Heaven. Ivan Dobchev combines Stanev’s short novel with other uncanonical and biblical texts. The performance peers into the metamorphosis and emptiness that Lazarus experiences after being resurrected. A poetic theatre parable on the ceaseless human quest for the divine, this time within himself.

Lazarus and Jesus bears the recognizable for the works of Sfumato features – fine and laconic, but intense theatre expression and visual symbolic. Through a specific musical and rhythmic speech and concentrated on symbolic gestures, the performance is very suggestive and presents a contemporary manifestation of the ecstatic theatre.

In the “Lazarus case” it is suggested that the he who has been Beyond has seen the Kingdom of Heaven. But to all the questions about there the resurrected retains gloomy silence. In the day of the miracle, when Jesus sees the eyes of the resurrected, He says in a loud voce to his followers: “Today our brother Lazarus lost the Kingdom of Heaven…” Our performance explores this loss and all its consequences.
Ivan Dobchev