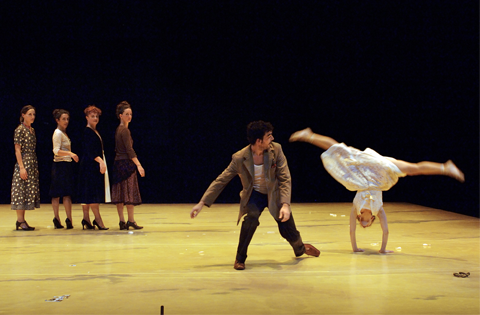 “Senza Tempo” is founded in 1991 by the choreographers Inés Boza and Carles Mallol. According to the critics their performances demonstrate “one of the most innovative and poetic languages currently to be found on the contemporary dance scene”. In their compositions they combine different theatre and dance languages. They are woven with the logic of poetry, with the game of surprise of the unexpected, feeding the subtly provocative humor of bewilderment. Surrealistic images of everyday life flow into one another, making no promise to tell stories. They urge the spectator to let himself to the flow of poetic images and ideas provoked by them.

“Margarita’s Song” is their newest production, a peculiar “acrobatic exercise over memory” with the means of contemporary dance theatre language. Central figure is the woman in the history of Spain. Revealing the life stories of four women, through dance, speech, music and compelling visions, the dancers piece together the history of Spain in the beginning of 20th century. Here the man is barely a poetic absence.

“We, the Spanish women from the end of 20th century, were given the key to freedom. In return for this the key to memory, which opens the door to continuity between generations, was denied to us. Thus our (supposed) freedom was built over the silence of our grandmothers and our mothers, over oblivion, over ignorance. One day their аsleep voices appear in a dream, in a picture, in a song which comes again revealing and persistent, in a question without answer, in a revealed story…”
Inés Boza