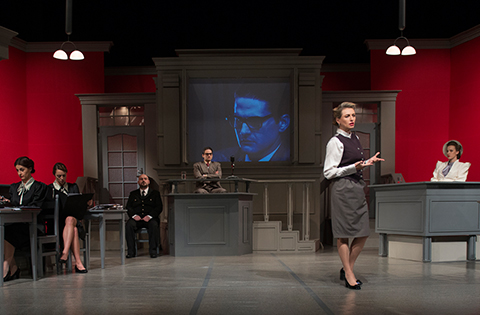 “Night of January 16th” is the first play staged in Bulgaria by the US writer and philosopher Ayn Rand who is otherwise well-known for her novels and treatises (“Ideal”, “The Fountainhead”, “Atlas Shrugged”). She formulated the ideas of objectivism, or the “philosophy for living on earth”. It is precisely those ideas that are engaged in an unusual dispute in this performance and its end depends on the reactions of spectators. A New York courtroom in 1930s. Clerk Karen Andre is charged with the murder of her boss and, as it turns out, her lover. But there are many obscure questions surrounding the death case. Secrets, behind-the-curtain games, intrigues, love and greed for power turn up in the course of the proceedings. And here comes the main provocation: members of the audience assume the roles of jurors who must decide how far an individual’s boundaries and rights can be pushed in his/hers pursuit for happiness. “We will try to give the audience a chance to face Ayn Rand’s ideas by rediscovering her. Thus we hope to get closer to a real discussion” – this is how director Plamen Markov states his intention and he materializes it with a powerful and convincing cast.

Plamen Markov is an established director in Bulgarian theatre, and a professor of Stage Acting and Directing at the National Academy of Theatre and Film Arts. He has staged both large-scale and epic forms, based on historical plots and sources (such as “Priests and Witches,” based on texts dating from the period of Bulgarian Revival; “The Masons and the Priest” etc.) and chamber, psychologically nuanced performances interested in modern and contemporary playwriting (Martin McDonagh’s “The Beauty Queen of Leenane”, Yasmina Reza’s “Art,” etc.).