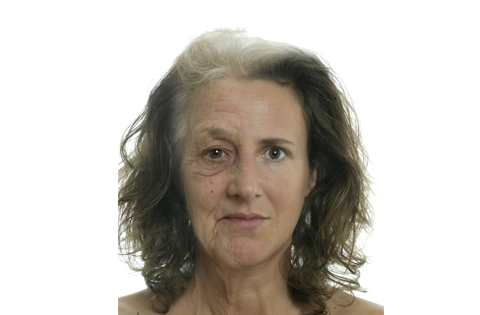 Ursula Martinez produces solo and collaborative performance for theatre, site-specific, installation, cabaret, night club, film and television. She is a live artist based in London. She has worked with several leading experimental theatre companies including Duckie, with which she is an associate artist. Combining her experimental theatre background with her cabaret experience and together with the collaborator Mark Whitelaw she produced her first theatre show A Family Outing (1998) starring herself and her parents. It was a huge hit at the 1998 Edinburgh Festival and subsequently toured internationally to great critical acclaim. Martinez and Whitelaw collaborated again two years later and produced its second part – Show Off (2000). Employing a unique combination of elements from cabaret to video and striptease, Show Off skilfully juggles ideas of image and identity, reality and performance.

”O.A. P.” is the last part of this original, funny and thought provoking autobiographical theatre trilogy. Here Martinez – single, childless and fast approaching 40, presents her fears and paranoia about growing old. Will she become a wise and respected old sage, or a dreary old hag who goes on and on about how she used to be a cutting edge performance artist?
Using a series of interviews with old age pensioners Ursula Martinez creates a real master performance between the show and the confession.

It feels like a show that is not only warm and witty but also makes a difference.
“The Guardian”

“O.A.P.” combines skilfully the live performance, based on direct contact with the audience and video-show. With the typical for Martinez straightforwardness that does not regard any guarding lines and limits, it shockingly imposes and then playfully cools human panic fear of growing old.
Kamelia Nikolova, “Homo Ludens” Theatre magazine