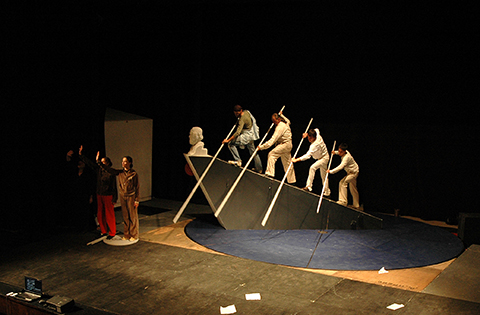 Stefan Moskov graduated Puppet theatre directing and now is active as a theatre, TV shows and film director. His stagings (“Comedy of Servents”, “Phantasmagoria”, “The Gun Will Fire After The Interval” etc.) are usually composed as fragments of improvised sketches mixed with witty multimedia visual effects. The surprising combinations of film and real characters and images create poetic associations, quotations and multilayered references with a constant piety to the power of imagination and art.
Stefan Moskov’s performances happen as improvisations on themes in co-authorship with the actors, the stage designer and the composer. His deconstructive and ironic approach align him among the Bulgarian directors with a distinguishing style. “Odysseus’ Journey” presents again a lively mix of improvised sketches and parodies of cultural stereotypes and poetic metaphors. This time they are based on the myth of Odysseus. The story about the ancient Greek hero who for twenty years has been traveling back to his home-island Ithaca and faithful wife Penelopa, is presented as a collage of theme variations on the notion of the traveler who is in search of himself.
“In the performance Odysseus is a mythic hero and at the same time a contemporary illness called dromomania – not to be able to stay on one place. Odysseus chooses the road and death to motionless and static immortality.”
Stefan Moskov