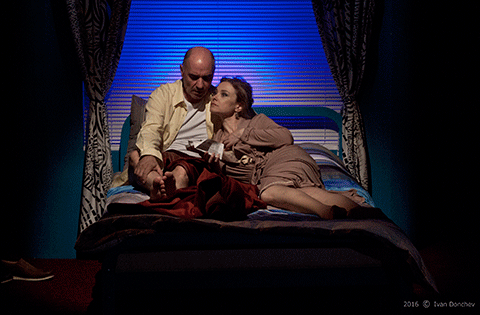 ONE NIGHT WITH YOU

After the play “What the Night is for” by Michael Weller

The story of two persons in a strong need of each other but the irreversible stream of time makes it impossible for them to get together again. Today, Adam and Lindy are about 50 years old, and have long overcome their love. Each of them is now married to another partner but after many years they are reunited in a hotel room. There are, however, deeper reasons behind their seemingly cool arrangement that gradually come to the surface. The two share a night full of frankness and deceits, of passion, hope and repentance.

One of doyens of Bulgarian theatre, Krasimir Spasov staged this contemporary love melodrama by insightfully penetrating the human relationships. Their emotional nature is recreated in a dense and exquisite manner by actors Stefka Yanorova and Georgi Kadurin. The play reveals another facet of US author Michael Weller who is known as the screenwriter of the rock musical Hair (1979) and Ragtime (1981).

IKAR 2017 Award nomination for best actress in a leading role