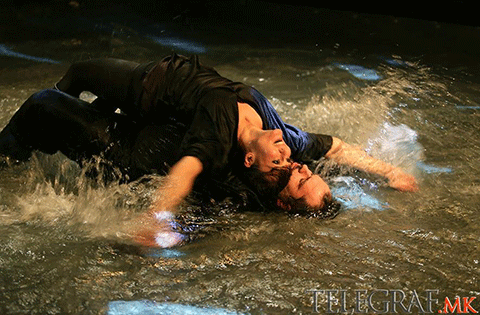 In Turkish, with Bulgarian and English surtitles.

A classical tragedy of love, jealousy and intrigues  as a passionate physical spectacle.

One of Macedonia’s leading directors Dejan Projkovski offers an unusual solution to Shakespeare’s classical tragedy “Othello” where love, jealousy and intrigues get intertwined with a fatal end. He chooses six emblematic characters and focuses his attention on their relations. The entire action is set in a pool symbolizing the tears of Desdemona who dies, guilty without guilt, from Othello’s hand. With much passion and physical expressiveness, a real tragedy about the destructive force of jealousy and human ambition unfolds before the spectators.

Director Dejan Projkovski graduated in Stage Directing at the National Academy of Theatre and Film Arts in Sofia, Bulgaria. Currently he is the director of Macedonian National Theatre in Skopje.

Turkish Theatre in Skopje was founded 1950 and it was firstly named Minority’s National Theater. Since then it has functioned as a professional theatre of the Turkish and Albanian ethnic minorities in Macedonia.