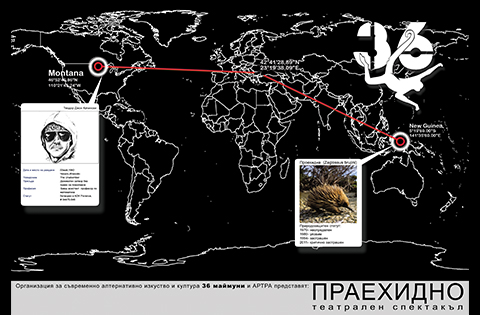 One of this season’s most successful performances coming from the independent theatre scene, P.O.Box Unabomber is a theatrical story with touches of cabaret and video art about threatened species in nature and society. A jigsaw puzzle of stories about evolutionary dead-ends, rapidly developing technologies, odd scientists, a disintegrating family, a satellite overseeing everything down on the Earth and millions of nanoparticles. The place where the roads of the last proechidna (Zaglossus bruijni), the biggest egg-laying mammal on Earth, roaming around to find another of its species intersect with those of Ted Kaczynski, a promising math professor who has traded science for eco-terrorism. And all of them are looking for an answer to the question “Where are we actually heading off to today?” Ikar 2012 Award for best theatre play and for best director.