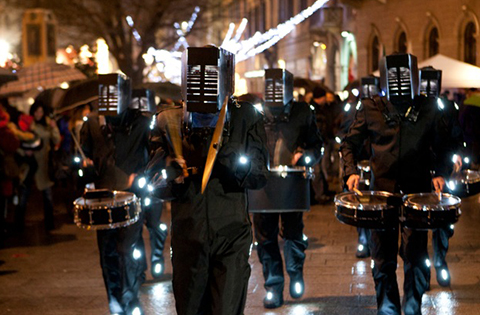 The “Parade” is an itinerant performance that just like an exuberant ritual procession moves from place to place in the center of the city and merges with the peasants. Dressed in shining knightly costumes the DADADANG percussionists go out on a sensational and festive parade performing a series of dances, rhythmical gestures and steps and dragging the spectators into the pulsations of their rhythm. Hidden behind masks, the ten percussionists get into the role of limbs of the “Dadadang machine”. “Parade for Moving Percussion” has been successfully touring for over 30 years already to some of the biggest European festivals and cities. In 1993 the Dadadang´s project, renewed in its costumes and choreographies, was given an award for the most original and innovative project at the Festival internationale du MontGénevre, France.