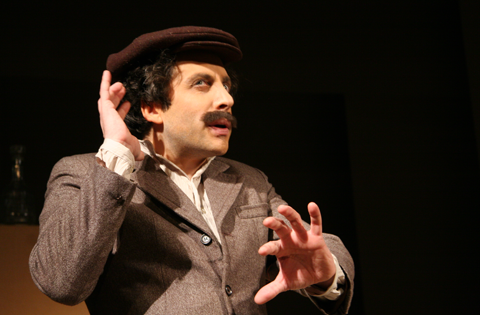 Marius Kourkinsky is one of the most popular and favorite of all generations actors in Bulgarian contemporary theatre. His original and incomparable presence on the stage, outstandingly demonstrated in a succession of mono performances in the 90s, brought him a number of awards and the name of “theatre phenomenon” by critics and journalists. In the last years Marius Kourkinsky has been working mainly as a theatre director and most of his performances have also been included in the ITF “Varna Summer” program.

The mono performance “Perturbation” is Marius Kourkinsky’s triumphal return on stage as an actor after almost six years break. This time he chooses three short stories by the Bulgarian writer Nikolay Haitov and directs his attention to the philosophy and the austere life in the villages of the Rhodope Mountains. United in a multilayer soliloquy, which the actor delivers masterly with a strong impact, the short stories present several peasant characters and their wavering between folklore and superstitious beliefs, the harsh instinct for survival and the pure human striving for happiness. Almost without make-up, props and theatrical costumes, relying mostly on the power and the richness of his actor’s nature, Marius Kourkinsky theatrically but also with a deep understanding penetrates into the vanishing world of the Bulgarian village.

“In the performance these three short stories are put together in the form of confession of a whole human life. A man shares his life before he passes away… But don’t search constantly the connection. Simply three short stories by Nikolay Haitov… Our time is too perplexed. It would be beneficial for the chaotic contemporary man to see one system with strict order, a life that can be described with three-four stories.”
Marius Kourkinsky

Awards:
UBA’s award Ikar 2007 for best actor
Audience award and the award of “Chudomir” Foundation – Festival “Comedy Hit 2007” in the city of Kazanlak