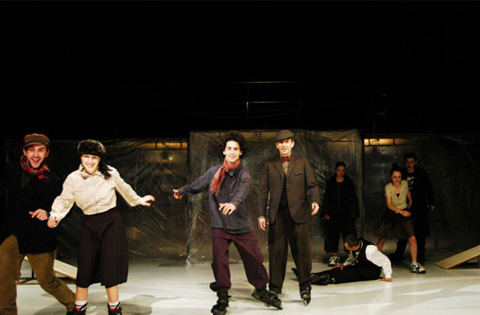 In 1985 Margarita Mladenova staged for the Satirical Theatre “A Tale For the Staircase” after themes of Hristo Smirnensky’s (1898 – 1923) satire and poetry. 20 years later she turns again to the parable about the Young Intellectual who wants to take revenge for human misery, but on his ascent to the heights of power he accepts the Devil’s protection and finally gives up his ideals. This time M. Mladenova enriches the literary side of the performance with texts from the whole Bulgarian classic satire and poetry. In the style of Brecht’s epich theatre and the political cabaret she interprets the theme of political power as something metaphysical, which prevails the self. The performance is awarded with “Askeеr” 2005 for best music and nominated for best performance.

The bitter irony and the sometimes biting satire of this whole literature is not directed only to the strong of the day who have made this compromise and have lost their own humanity and human senses. Here, in this intention, the stress is rather of self–irony. Towards all of us.
Margarita Mladenova

Plebeians by birth” is a performance, capable to give a possible solution to the problem of well-made theatre – one that is appropriate for the broader audiences and at the same time can reach the depths of meaning and coherency in style.
Ana Vasseva, “Literaturen vestnik” Newspaper