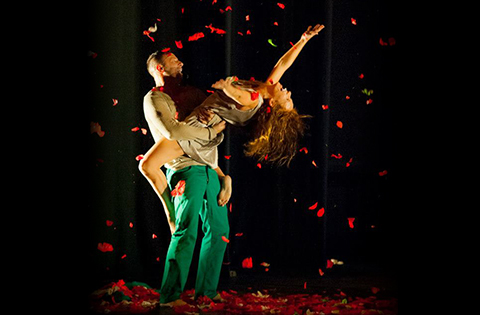 An emotional dance story where two of the most famous names in contemporary Spanish dance, theatre and cinema meet Losdedae Company was established in 1997 by the choreographer and performer Chevi Muraday and today it is one of Spain’s most important dance companies. In 2006, Muraday himself was given the National Prize for Dance that is awarded annually by the Spain’s Ministry of Culture. For the performance “Return” he invited the Spanish theatre and movie star, the actress Marta Etura, winner of international film awards and nominated many times for the most prestigious national film prize, Goya, which she won in 2009 for her role in the movie “Celda 211.” Marta Etura’s passion for dance and choreographer and dancer Chevi Muraday’s interest in words has brought them together in the performance “Return.” It is a story about the vicissitudes of human relationships. Etura and Muraday embark on a dangerous and poetic play while trying to understand the nature of love and the complexity of relationship towards the other. They create a whole universe in the space between them where they play out their dream but something breaks up and they see it was all an illusion… Chevy Muradai studied ballet at Escuela de Carmen Senra, then went on to New York. He was successful at the dance awards in Madrid in 1992 and won a scholarship for the Laban Centre in London. In 1997, he founded the Losdedae Company that now has more than 30 productions having been presented at festivals around the world. Marta Etura is among the new big names in Spanish theatre and cinema. She started to do dance while she was studying at the Theatre School. Her professional career started in the movies but she has been successful on the theatre stage as well, e.g. her Teatro de Rojas’s “best actress” nomination for her role of Ophelia in “Hamlet.” In 2011, she was elected Vice-President of the Spanish Film Academy.