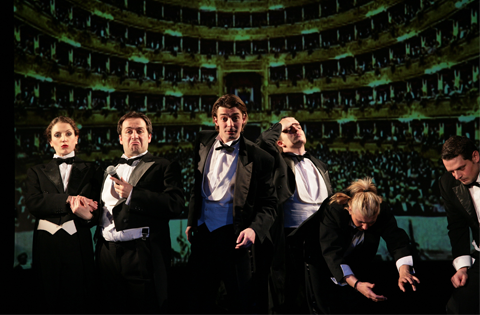 Small City Theatre Off The Channel

Rumen Tsonev is composer of film and theatrical music, conductor and theoretician. Professor in Musical theatre and Vocal interpretation at New Bulgarian University – Sofia and Head of the Theatre Department. Professor, Ph.D. in Sorbonne and in the Institute of Art Studies – Bulgaria. He is author of numerous studies on musical theatre of avant-garde and orthodox vocal traditions. Since 1996 Rumen Tsonev has been musical director of “Atelier for Theatre and Music” / ATEM/ – Paris (the biggest centre for contemporary music theatre in Europe) and of the National Theatre in Toulouse. He teaches at NBU, Sorbonne and at the National Conservatory for Drama – Paris, guest-professor at the Lion Conservatory, The Royal College for Music – London and others. Rumen Tsonev has led masterclasses in Paris, Stockholm, New York, Boston, Marseilles, Lyon, Tours, Rotterdam. He has been distinguished with several awards and has composed music for over 140 theatrical performances, films, as well as musical theatre works. Performances with his music have been played in many countries around the world.

Among the performances for music theatre, written by him, the most important have been created for “Atelier for Theatre and Music” /”Detours”, “Dejouer”, ”Le roti de l`imperatrice”) and also “Theatrophony of the Affects” for the International Festival for Contemporary Clavier Music “Pianissimo”, Sofia.

“Rhythm & Blues” is Rumen Tsonev’s first author performance on Bulgarian stage, with which he wants openly to entertain. With the actors of “Off the Channel” they create and artistic show that tells unexpected anecdotes about popular arias and offer the spectators to hear in a new way an attractive mix of pop, rock and jazz hits.