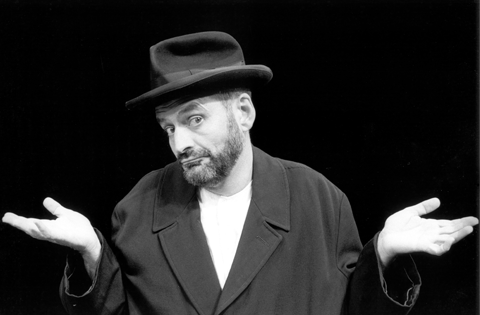 Gareth Armostrong’s career in theatre as actor, director and teacher has taken him from The Royal Shakespeare Company to London’s West End and to over fifty countries throughout the world. His Shakespearean roles have ranged from Romeo to Macbeth and from Puck to Richard III.

The directing of his authorized text “Shylock” Armstrong entrust to Frank Barrie – also an actor with a broad range of Shakespearean roles in the National Theatre. Together they explore one of the Bard’s major and most controversial characters – Shylock. He is the notorious Jew-money-lender from the comedy “The Merchant of Venice”.

Shylock – a villain? A victim? Or something more intriguing? Gareth Armstrong’s award winning play confronts and confounds the stereotypes around the popular Shakespearean character, telling his tragic and hilarious, almost unbelievable story through the eyes of Shylock’s only friend – Tubal, an episodic character of the comedy.

Armostrong masterly celebrates the richness of Shakespearean language and conjures up a whole cast of characters – from Portia to Pontius Pilate, from Antonio, the merchant, to Adolph Hitler, and from Romeo to Max Reinhardt. He artfully combines the intimacy of the mono performance with interesting theatre techniques that reveal his broad talent of comic actor and his profound knowledge on Elizabethan and contemporary theatre.