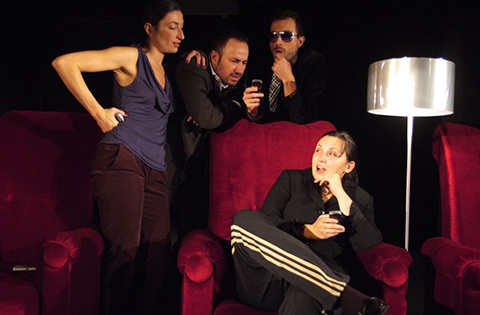 Four friends get together once a month to play a strange game they have invented in their school years. Now they are older with good jobs – a writer, a layer, an actor, a bar holder…, but it is still in the game where they find the only secure space in their lives. The intrigue sets off as one of them shares his decision to get married and leave the game. Everything is jeopardized to change.

Small Play for Children’s Room (www.smallplay.net) is Yana Borissova’s debut, discovered through the Theatre 199’s competition for new chamber plays in 2007 where it won first award. After that the play receives the Union of Bulgarian Actors’ award Ikar 2008 for dramaturgy and an Askeer nomination for best play. After a stage reading of the play at the international festival for contemporary playwriting Corps de textes in Rouen, France, it is published in French by the prestigious publishing house Les editions theatrales. Small play for children’s room is going to be presented with a stage reading also at the Avignon Theatre Festival 2008.

For his work on the play in Theatre 199 Galin Stoev comes back in Bulgaria. In the last years he works mainly in Belgium and France. His Liege based company Fingerprint was selected for the official program of the Avignon Theatre Festival 2007 with the performance Genesis 2 by Ivan Viripaev. In Paris he stages for Comedie Francaise.

In a very sensual way the play is preoccupied with themes such as the contemporary generation and intimacy. In a post-communist context the attention is focused on the feeling of loss and lack of direction for one whole generation that had to grow up in the vacuum between two epochs – the communist regime and the liberal reality. The divided mind is the definite feature for lots of people around my age. Yana manages to talk about this with a lot of humor and tenderness.
Galin Stoev