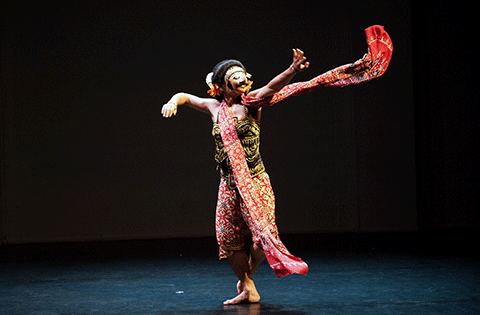 Performance and Choreography Rianto and Surjit

In English and Indonesian with surtitles in Bulgarian and English.

Choy Ka Fai conceived “SoftMachine” as an expedition across the choreographic landscape of Asia – its past, present and visions for the future of dance. Part of the project is a series of documentary performances – stage portraits of choreographers from various Asian cultures.

Surjit Nongmeikapam is a dancer from Manipur, India. The documentary performance will present the process of creating a new dance performance for the consumption of the European audience, revealing the artistic strategies, marketing ideologies and the precarious attempt at exoticizing oneself.

Choy Ka Fai an artist and performance maker. His research springs from a desire to understand the conditioning of the human body, its intangible memories and the forces shaping its expressions. Ka Fai graduated from the Royal College of Art, London, with MA in Design Interaction in 2011 and was conferred the Young Artist Award by the National Arts Council, Singapore, in 2010. He was the resident artist at Kunstlerhaus Bethanien, Berlin from 2014-2015. His projects have been presented in major festival worldwide, including Sadler’s Wells London (2016), ImPulsTanz Festival, Vienna (2015) and Tanz Im August, Berlin (2015 & 2013)

“Ka Fai investigates and extends the boundaries of choreography into the documentary, it is an innovative and bold production contemplating dance and life as an inseparable contour.” Ezekiel Olivera, FiveLineAsia, Singapore