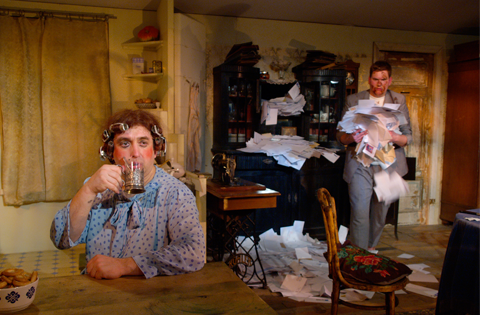 The Latvian Alvis Hermanis has gained the name of one of the most interesting young directors on the European stage whose productions are broadly acclaimed and are of interest for many international theatre festivals. He is holder of a number of awards and in 2007 he is awarded with the 9th Europe Prize for New Theatre Realities. Since 1997 Alvis Harmanis has been artistic director of New Theatre – Riga where he works on the principle of theatre studio, exploring the possibility of developing theatre aesthetics. He has already realized two performances in Theatre – Zuerich. His scenic language is distinguished by particular interweaving-game between naturalistic detail and different concepts, signs, images and symbols of Eastern and Western cultures. Through it he continues his steady interest in quest for new experience and new limits of reality.

“Sonja” is one of Alvis Hermanis’ newest productions. It is based on the story of the same name by the Russian writer Tatjana Tolstaja (granddaughter of the eminent Russian classic author Alexej Tolstoj).
It tells the story of Sonja – a little ugly and a little lonely woman who receives one day a love letter, written by her evil friend Ada. And it happens to be the happiest moment of her life.

Hermanis chooses an interesting way to recreate with the means of theatre the contrast between Sonja’s ugly appearance and her delicate and sensitive soul and engages a male actor to play her part. Irony and melodrama, grotesque and sorrow alternate in the performance. It manifests an innovative theatre language built upon combination of exaggerated theatricality and hyperrealistic presence on stage.

The aim is not the actor to turn into woman. The issue is more of understanding the women. We are not playing a woman, we are trying to create a female image, character and tell about her soul. I doubt that the soul can have gender.
Alvis Hermanis