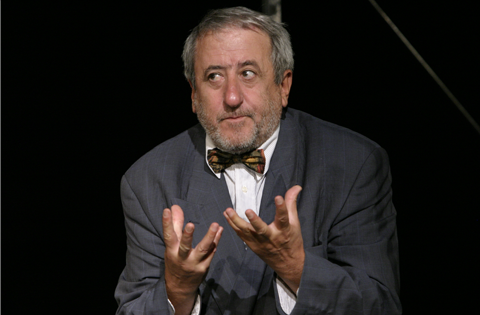 Jean-Pierre Dopagne is one of the most staged contemporary Belgium playwrights. His style is marked by a mixture of cruelty, tenderness and humour through which he explores the disintegration of society and of human soul. Dopagne won recognition with his first play “The Teacher”, which in a new version “Teacher!” has been staged in many European theatres. For his performance of the teacher, sentenced to repeat for the rest of his life the story of how he had killed some of his pupils, Velko Kanev is nominated for UBA’s award for best actor in a mono performance

Today I am convinced, that the monoperformance is theatre of full value with an adequate dramatic power. Namely because the monologue tells stories and does it in the spirit of the old tradition of the storyteller who relies on participation of the audience. In this sense, the monoperformance is not “theatre of loneliness” – just the opposite – it is an unique place, where somebody’s words meet other people’s imagination and this encounter creates a whole new universe.
Jean-Pierre Dopagne

Velko Kanev performs the role of the Teacher with such intensity of thought and feeling, that he achieves great impact on the audience.
Svetlana Pancheva, “Duma” newspaper