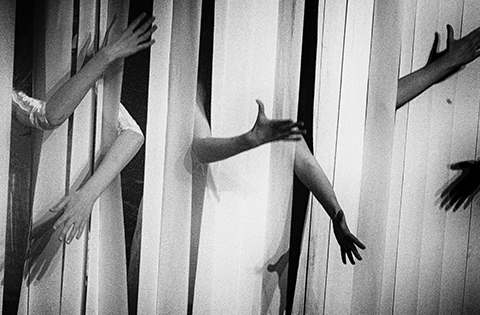 THAT THING,
That sees all of you
And you can only see its eye. (after Radichkov)

Theatre Laboratory “Sfumato” was established in 1989 by directors Margarita Mladenova and Ivan Dobchev as a territory for theatrical research. Process, rehearsal, the distance to human memory are leading parts of interest in their work. They have realized a number of workshops with Bulgarian and international actors by authors and subjects, which afterwards become the basis for future productions.
In this workshop Margarita Mladenova and Ivan Dobchev turn to the bizarre characters from the works of Bulgarian writer Yordan Radichkov, to the world in-between the mythical and the real, in order to explore “one’s meetings with tentsi (goblins), vampires, ghosts, vedi (witches) and nymphs in the mad grasses of the Balkans.”