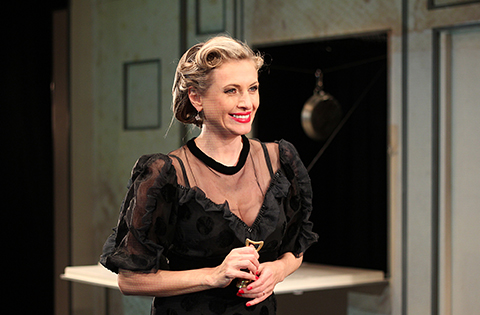 In “The Cabinet Minister’s Wife” the classic master of comedy Branislav Nušić skillfully jokes with a painfully familiar phenomenon. Both: a biting political satire and an ingenious anecdote, the play shows how in a single morning the simple wife of a newly fledged politician turns into a power-hungry woman. Actress Lilia Maraviglia gets under the skin of the common housewife Živka turned Mrs Živana Popović, with lots of zeal and talent. Her power-drunk heroine vigorously builds her new persona with all means possible… but in politics nothing is ever certain. Director Nedyalko Delchev and Theatre “Sofia”’s dedicated troupe create a remarkable present-day version of this classic comedy that has been on stage ever since it was written in 1931.

Branislav Nušić (1864–1938) is a Serbian lawyer and diplomat, writer, satirist and comediographer, a good expert in Balkan manners. He also wrote short stories and feuilletons. His reputation as a playwright made him one of the classics of world comedy.  Among his most renowned comedies, that are still being staged today, are “The Cabinet Minister’s Wife,” “Doctor” ,“The Deceased.”

Nedyalko Delchev is a painter, playwright, stage and television director. He has taught practical theatre courses at Kansai Gaidai International University in Japan, the American University in Blagoevgrad and New Bulgarian Univesrsity in Sofia.