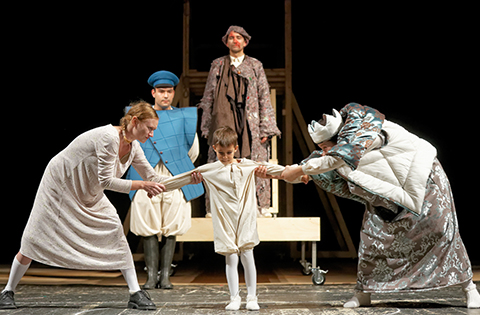 “Now, it is time for Brecht again,” says director Margarita Mladenova who, after “Mr. Puntila and His Mati” (2014/15), has staged another of Brecht’s famous and important plays – “The Caucasian Chalk Circle”. Intertwining different times and perspectives she is after the big topic of goodness through an ancient story. The story of the girl Grusha who is left with a boy, unable to leave it and gives up everything because of him. “The Caucasian Chalk Circle” asks whether it is possible for one to be good and live well. At what price? What does it mean to be good and do good – the most difficult thing for man? The strong cast of actors from Varna Theatre stands out against the background of this study of simple truths behind complex questions.

Margarita Mladenova is among the most original and well-established names of contemporary Bulgarian theatre. She is the author of more than 150 performances for drama theatre, television and opera, staged in the big theatres in Sofia and across the country and she has won all national awards. Since 1989, she has been the director of Theatre Laboratory “Sfumato” co-founded by her and director Ivan Dobchev as „a territory for theatrical quests and research” and has garnered wide international recognition. Since 1972, she has been teaching acting and directing at National Academy of Theatre and Film Arts.