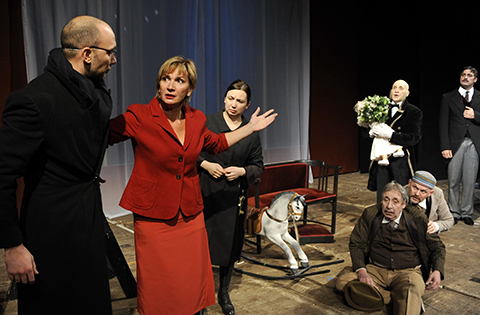 “The Cherry Orchard” (winner of the Ikar 2010 Best Performance Award of the Union of Actors) is the last production of Krikor Azaryan, who was posthumously honored with a special Ikar Award for Distinction and Dignity. It came as the natural conclusion to his Chekhov triptych that included also “Seagull” and }Three Sisters”. As in most of his interpretations this one is also left open-ended. The story of the bankrupt landowners Ranevskaya and Gaev, who are incapable of retaining their estate, which falls into the hands of the son of serfs Lopakhin, could be interpreted as an absurd comedy, an existentialist drama, a social tragedy. Krikor Azaryan gives sound to its polyphonic nature and creates a world consisting of scenes following the ruthless passage of time.