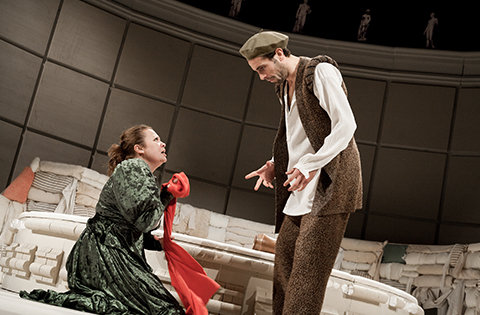 In recent years the actress and director Diana Dobreva has been developing her own theatrical style. It makes use of the emotional power of imagery, music and the expressivity of the actors’ gestures. She manages to shed a new light on the legendary heroes from myths, drama and literature (among her former stagings are “Medea”, “Macbeth”, “Casanova”). Her most recent performance again sets foot on a classical work – the Renaissance masterpiece Decameron, a novel of 100 stories told in ten days by ten young men and women seeking the feast of life and salvation from the plague raging in the villas near Florence. They enjoy the last moments of their lives while discovering love as a fete but also as man’s supreme ordeal. “Ikar” Award of the Union of Bulgarian Actors for best actress in a supporting role – Anastasiya Ingilizova.