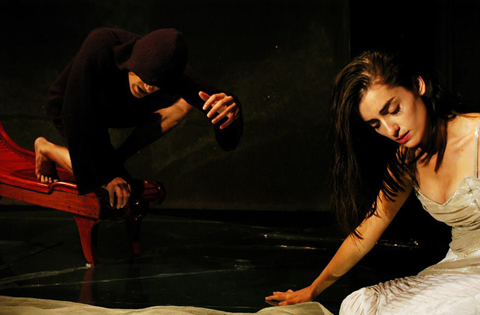 THE FISHERMAN AND HIS SOUL

Marius Kourkinksy makes his debut in the beginning of the 90’s with a succession of mono performances for which he wins many awards and exclusive popularity. “Theatre phenomenon” is the most frequent definition the theatre critics use for his unique acting. Simultaneously with the mono performances the actor works also as a theatre director. “The Fisherman and his Soul” is his third director’s performance, selected for the festival “Varna Summer”. For the part of The Witch Radena Valkonova is nominated for UBA’s 2005 award for best actress in a supporting role.

… The Fisherman is every man on his own, in his own boat, his own sea… It is a precise image of the man of today who devours his life – devours all his feelings and needs, but his soul is never with him… Is it possible for us to communicate with our own souls? Are we worthy enough to talk to them? Have we ever been together?
Marius Kourkinsky

This performance continues the theatre fairy tale, to which this director comes back often – the fairy tale about loneliness and love, about the loneliness, caused by love… with actors who have devoted themselves with pleasure to his extraordinary world.
Yuriy Dachev, selectionist