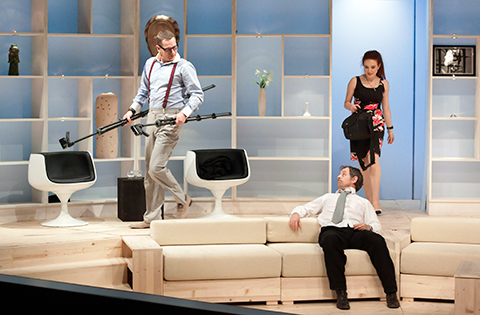 THE GOAT, OR WHO IS SYLVIA? (notes toward a definition of tragedy)

The happily married and successful architect Martin Gray (Michail Bilalov received Ikar Award 2010 of the Union of Bulgarian Actors for best actor in a leading role) admits to a friend of his that he is in love with Sylvia, who turns out to be … a goat. This revelation, which breaks one of the fundamental human taboos, destroys the comfort of his family happiness. The audience witnesses a human catastrophy, presented by a brilliant theatrical cast. The play, which won the Tony Award creates a new hypothesis of what is conceived as tragic today by posing the question – where are the boundaries of intimacy and loneliness, and of the ability to understand others.