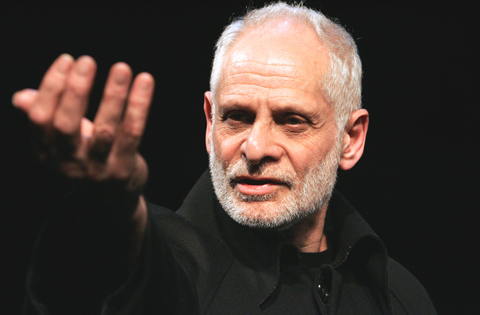 “The Grand Inquisitor” is one of the newest productions by the legendary director in Theatre Buffe de Nord – one of the emblematic landmarks of XX and XXI century theatre. Brook’s phrase: “I can take any empty space and call it a bare stage. A man walks across this empty space whilst someone else is watching him, and this is all that is needed for an act of theatre to be engaged”, is applied here as a main principle of the performance. Amidst the empty space of the stage a platform is set, on and around which Bruce Myers is acting in front of the constant sidelong look of a silent listener.

“The Grand Inquisitor” is one of the key chapters in Dostoevsky’s novel “The Brothers Karamazov”. It is part of an ongoing debate between “the intellectual” Ivan and his brother – the humble Alyosha, on Christianity. Ivan tells him about his unwritten poem on the meeting between an old cardinal of the 15th century Spanish Inquisition with Christ, who returns on Earth, but at cardinal’s order, is arrested and flung into prison.

The performance is concentrated on the cardinal’s speech in front of the silent listener and let it sound like a chilling parable on freedom and human nature, power and faith.

Bruce Myers who has been working for a long time with Peter Brook and is one of the big names of English and world theatre, both narrates the story and plays the cardinal. He achieves the artful effect of embodying both martyr and monster while never swinging between extremes.

“The Grand Inquisitor” of C. I. C. T. and Theatre Bouffe de Nord is a memorable encounter with one of the most significant theatre directors of the second half of XX century and his long-term collaborators.

with the support of BG AIR, Sofia Municipality and Institut Francais