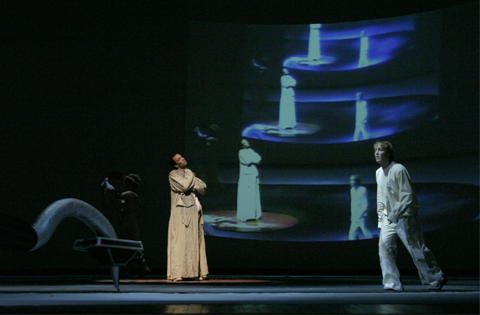 THE GUN WILL FIRE AFTER THE INTERVAL

Author: After A. P. Chekhov

In the beginning of the 90’s Stefan Moskov founded the first Bulgarian private theatre “La Strada” and became extremely popular with his TV show “The Street”. His unique directing style ( “Romeo and Juliet”, “Jam Session”, “The Master and Margarita”, “Comedy of Servants” etc.) combines cinematographic and theatrical approach in the spirit of the theatre of improvisations. His performance have been shown at numerous international theatre festivals, including Avignon Festival. Since 1994 Stefan Moskov has been staging successfully in Germany where he made his first performance after A. P. Chekhov “House № 13” at “Thalia Theatre” in Hamburg.

“The Gun Will Fire after the Interval” is a free composition after the stories “Jonich”, “Jocke”, “Albion’s daughter”, “Drama”, the one-acts “A Swan Song”, “Proposal”, “A Tregedian in Spite of Himself”, and some dialogues from the plays “Three Sisters” and “The Seagull”. Created with a sharp sense of absurd and grotesque, an inimitable humor, mingled with refined lyrism, this performance is Stefan Moskov’s debut on the stage of the National Theatre.

Chekhov is my favorite author and I wanted to render the essence of his work and nature through myself.
Stefan Moskov, director