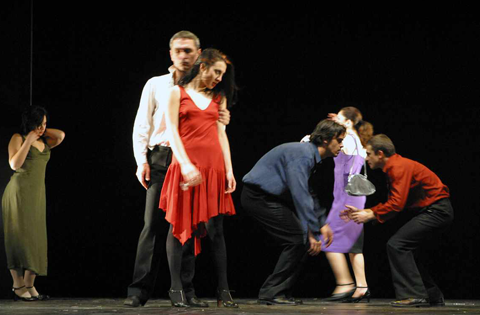 THE HOUR WE KNEW NOTHING OF EACH OTHER

Boyan Ivanov has graduated “Theatre Studies” in Bulgaria and “Directing” in Germany. He makes his debut by staging his own play “The Day” and since than he has directed plays by A. P. Chekhov, N. Chernishevsky, W. Shakespeare and others. “The hour we knew nothing of each other” is a performance that relies on actors’ improvisations in the creating of the various sketches, that capture spontaneous reactions in contemporary chaotic life. This is Boyan Ivanov’s third performance to be in the official selection of the festival. It is nominated for UBA’s award for best directing.

While we are walking on the street and come across somebody, who draws our attention, we don’t know anything about him/her. But in a way he/she has become interesting to us. You start thinking of him/her, of his/her way of living. This is the subject of the performance.
Boyan Ivanov in an interview of Nina Lokmadjieva