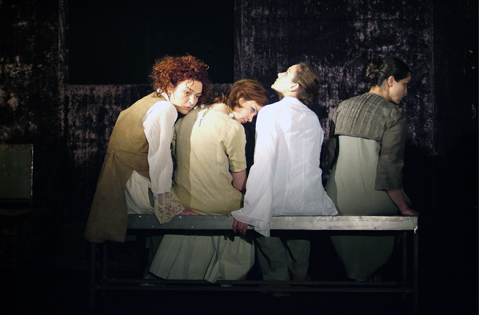 Stilian Petrov is part of the newest wave of young theatre directors. His debut performance “Parts of the Whole” after Radichkov (2005) won the Union of Bulgarian Actor’s Award “Ikar” for best debut and it was included in the official selection of ITF “Varna Summer” 2005. After that he makes his author’s project based on different texts “The Night from Within”, while his latest premiere after “”It’s Partly About Love, It’s Partly About Massacre” by Fiona Sprott is at the chamber stage of the National Theatre. Stilian Petrov has also directed several plays for the radio, some of which have been presented at festivals abroad.

“The Innocents” is the result of the long-term partnership of the director with one of Bulgaria’s most prolific and played authors – Theodora Dimova. The performance is based on a stage adaptation of Dimova’s novel “The Mothers”, winner of the Grand Prix at the national literature contest “Razvitie 2005”, as well as the Grand Prix for Eastern European Literature for 2006 of the Austrian publishing house “Wieser”.

Three women meet in the waiting room of a police department, where their children have been detained and interrogated on the accusation of having murdered their teacher. There they come across a mysterious woman, who knows the children’s secrets better than their own mothers. Meanwhile as a documentary one can see the interrogation of the children whose stories sound strangely detached and impenetrable. By precise shaping of the psychological portrait and with the help of the interesting quartet of the actresses, St. Petrov creates a pure and moving chamber performance which leads to the painful questions of violence among children; a performance about the innocence and the guilt in the closest family relations as well as in the society as a whole.

“I started writing “The Mothers” after that murder in the spring, when two fourteen year old girls murdered their classmate. There were other murders in the autumn, again done by kids. These murders are a sign, that in our society something is happening, something that had not happened before, That we have trespassed certain borders, that cannot be trespassed.”
Theodora Dimova

“The Innocents” is like a P.S., like a sequel to “The Mothers”. It’s about the most terrible and irrevocable delay – the delay to love”.
Stilian Petrov