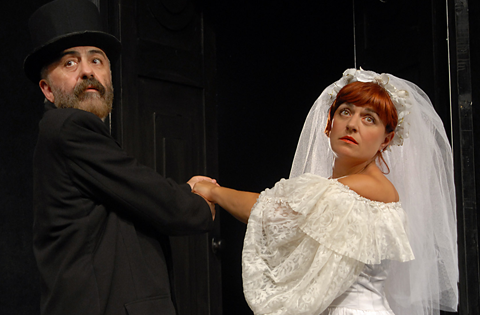 Yuri Pogrebnichko is artistic director of the founded by him in 1988 in Moscow “Theatre OKOLO (near) the Stanislavsky House”; he is also one of the established directors of the Russian stage. His theatre career starts with his entering the LGITMiK (Leningrad State Institute For Theatre, Music And Cinema) in the class of Rosa Sirota – former associate of the legendary Tovstonogov. After graduation Pogrebnichko works for a certain time with Yuri Liubimov and the Taganka Theatre as an actor and director; and after that in other theatres. His diverse and long artistic way includes many stagings of his favorite authors – Vampilov, Ostrovskiy, Chekhov and others. Pogrebnichko does not simply “put plays on stage”, he is rather occupied with the creation of an unique theatrical space of his own, of his own scenic world and his own actor’s school. His performances have been presented many times abroad in France, Belgium, Switzerland, Canada, USA, Denmark, The Netherlands and others. On the occasion of Gogol’s “The Marriage”, which he firstly stages at the “Okolo” theatre under the title “While I was creating I imagined Pushkin”, the Russian theatre specialist Ekaterina Salnikova writes: “The very nature of Pogrebnichko’s performances is so away from the cerebral, from the rational construction. The network of all sorts and kinds of connections seems vehement – as a moving picture out of control”.

The Bulgarian version of “The Marriage” takes out of its strictly Russian context Gogol’s classical comedy, which enacts in an unrepeatable way the dramatic duel between the two eternal human fears – the fear of engagement and the fear of loneliness. The grotesque and caricature characters, the many quotes and jokes with legendary names of the history of world’s theatre and drama, the unexpected sketches are just a part of the means of the director’s idiosyncratic style. The result of his meeting with Bourgas Theatre’s talented troupe and guest-actors is one of the funniest shows for the season, nominated in two important categories for the Union of Bulgarian Actors’ “Ikar” Awards – for best direction, and for best actress in a leading role (Maria Sapundzhieva).