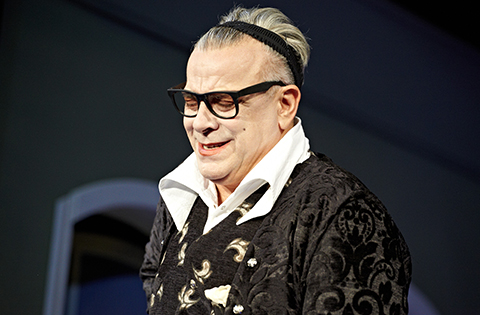 Lilia Abadzhieva’s new performance brings together a company of star actors to take the audience to the world of Molière’s classicist comedy where characters resemble puppets driven by their feelings and passions. At the centre stands Harpagon, a paradigmatic character personifying lust, greed and wrath. In Lilia Abadzhieva’s characteristic theatre style these vices are exaggerated to the extreme in an expressive plastic and caricature lines and funny and ironic play of styles and genres whirling up that character comedy. The stage looks like a theatre plaything box stuffed with intrigues, romanticism and mandatory morals typical of the genre. Here everyone stands their own ground shining with inventiveness of their comedy acting mastery.