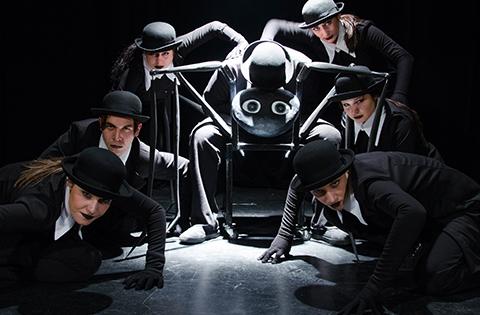 “The Samsas” is a performance that makes an unusual reading of Kafka by using the rich expressiveness of puppet theatre. An inventive and creative combination of puppets, masks, acting and object theatre, it is inspired by the writer’s diaries and his renowned novella “Metamorphosis”. In it the common clerk Gregor Samsa undergoes an odd metamorphosis from human into an insect. At first glance, his family is a remote observer of the change but it is deeply related to Gregor’s fate and is one of the reasons for his transformation. The performance creates an absurdist picture of rejection, overwhelming loneliness and personality crisis. A world built of the stuff the dreams are made of. A puppet performance for adults that does not aim at escapism, but offers awareness through the motive of the scapegoat.

Katya Petrova is one of the most interesting names in contemporary puppetry. She has directed dozens of puppet shows aiming mostly at adult audience (“Tsar Shushumiga” by K. Iliev, “Autobiography” by Br. Nušić, Shakespeare’s “The Tempest”) and others intended for “both young and old”  (“We, the Sparrows” by Y. Radichkov, “The Story of A Seagull and A Gang of Tomcats” based on texts by Sepúlveda, “Tramp King’s Tale” based on texts by Karel Čapek). All of them bear the distinct signature of their author that blends an interest in serious drama with a collage-based construction of the stage narrative, slapstick and improvisation.