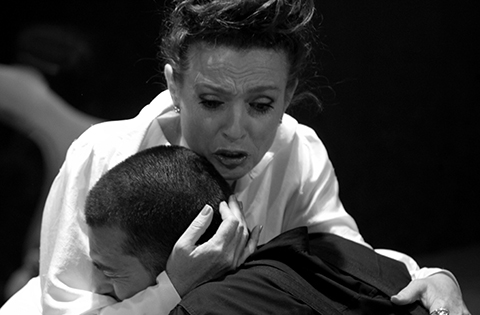 Krikor Azaryan is among the key figures of Bulgarian theatre from the second half of the 20th century. His theatre poetics is characterized by the ability to visually and sensitively create paradoxical contrasts with humor and passion for the theatrical. In his rich theatre biography, which includes stagings of texts coming from various styles and epochs (Shakespeare, S. Beckett, J. Radichkov, D. Dukovski, B. Papazov and many others) the oeuvre of Chekhov occupies a special place. His two versions of „The Cherry Orchard” again in Theatre Bulgarian Army have become emblematic for the Bulgarian theatre from the last decades. In 2008 Krikor Azaryan was awarded by the Union of Bulgarian Actors with award for his lifetime artistic achievement.
For the first time Azaryan works on Chekhov’s most enigmatic masterpiece – the comedy „The Seagull”, and stages it in its full complexity and polysemy. He abridges the original text and adds to it parts from Chekhov’s diaries and other plays. Azaryan’s performance does not aim at taking new and radical approach to the text, but rather concentrates on the universe of the characters, their specific relations and the unique presence of each. But it seems as if the leading character is that of the time passing by, accentuated by the inexorable feeling that not everything went in the way we wanted it to. The performance wins IKAR awards of the Union of Bulgarian Actors in the categories: best performance, best direction, best actress in a leading role (Boika Velkova) and best actor in supporting role (Miroslav Kosev).

Chekhov’s scope is very polyphonic – that’s why I feel him so close. He always follows the plot from many different angles. There is always this feeling of parallelism, and that’s what creates the story. All these contrasts: high – low, major – minor, big – small, add more meaning to what is suggested than to what is said. And that’s what theatre is!
While, why now “The Seagull”? It is a fundamental play with a complex of eternal themes. It is a play about love, death, art. About the generation gap, the parents-children conflict. Everything most essential is here, it is a play on global issues, which are intertwined in their most organic relations.
Krikor Azaryan