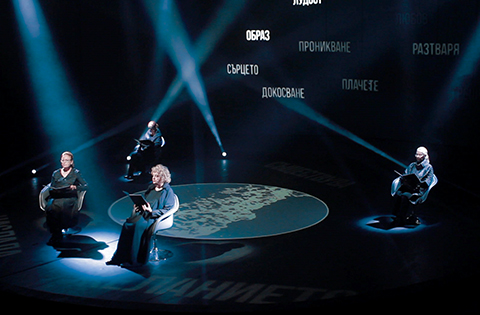 In “The Ship “Night””, the most recent performance of the newly-opened Azaryan Theatre at the National Palace of Culture, director Stilian Petrov brings together on stage for the first time four remarkable Bulgarian actresses: Petya Silyanova, Plamena Getova, Tatyana Lolova and Tsvetana Maneva. Their meeting happens through the texts of Marguerite Duras, one of the most important figures of French and European literature. In 1978, she published a short text called “The Ship “Night””. One year later, a theatre play and a film of the same name appeared: directed and written by Marguerite Duras herself. The texts tell about the telephone conversations of many years between two persons who fall in love in one another but never meet. Duras herself claimed that the plot is an actual story she was told by a close friend. However, some researchers of her work find a lot of autobiographical coincidences.

This work is the basis chosen by director Stilyan Petrov for his performance. By doing so he continues a steady line in his work on theatrical interpretations of literary works (“Parts of the Whole” based on texts by Yordan Radichkov, “The Innocents” after Teodora Dimova’s novel “Mothers”, “In the Ice” after Teodora Dimova’s novel “Adriana” and Dimitar Dimov’s “Untitled Novel” and others). These have established himself as a profound and talented director of well-outlined profile among the new generation of Bulgarian theatre. In his work on the stage version of “The Ship “Night”” he partnered with Yana Borisova who is distinguished for her fine sense of language and penetration in its emotional texture in her written drama. To Duras’s story they have added a couple of her other texts exploring the ideas of shadow, the invisible and the erotic in the writer’s enigmatic world.