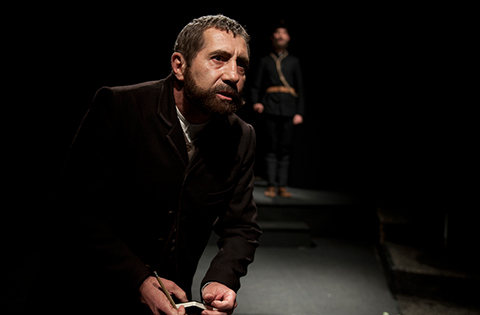 THE SPIRIT OF THE POET

Sofia, fictionally 1892. Stefan Stambolov’s dream in which he and Zahariy Stoyanov have to decide what to do with the “poet from the cover of the reader,” Hristo Botev who had turned up unexpectedly. The ex-revolutionaries and present-day rulers face a difficult choice. After the powerful “Knight of the Holy Spirit” about the drama of Aleko Konstantinov director Margarita Mladenova takes another look into the tragedy of a nation through the downfall of one of its greatest public figures. We could hardly imagine someone other than Hristo Mutafchiev and Valentin Tanev to impersonate Stambolov and Zahariy Stoyanov, respectively. A painful argument breaks up between them leading to the question of how the one-time freedom fighters become dictators: with no coups, with the formal consent of the people and with all levers of democracy. A performance demythologizing, rather than glorifying, national history and its tragic mistakes doomed to recur.