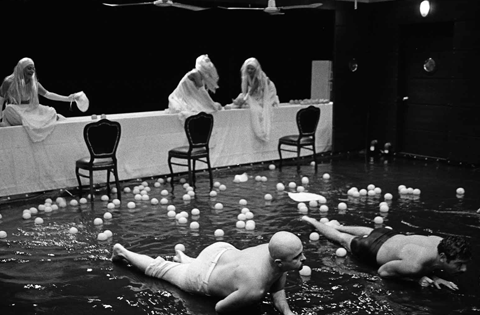 State Theatre – Adana was opened in 1966 as a stage for guest-companies. In 1981 it became repertoire theatre house and a year later its first own Shakespeare’s production was realized. Now the English bard is again on its stage in the production of one of the most successful and innovatory Bulgarian directors – Javor Gardev.

When in a play we encounter such powerful protagonist like Prospero who with only one gesture sweeps away all his enemies from the face of the Earth, then the main plot does not seem so important. It’s just that there is no opponent, strong enough to oppose to this omnipotence. Except if Prospero himself does not turn out to be his own opponent. Prospero’s battle with himself – here is the important tempest in “The Tempest”. Tempest, that through its purifying element leads him (the Strongest and most Powerful!) to the calm strands of forgiveness and mercy. Unfortunately, too late.

Javor Gardev’s Turkish language version of “Тhe Tempest” is a production that sweeps you into the action, dazzles the senses, inspires the imagination and confuses the audience…