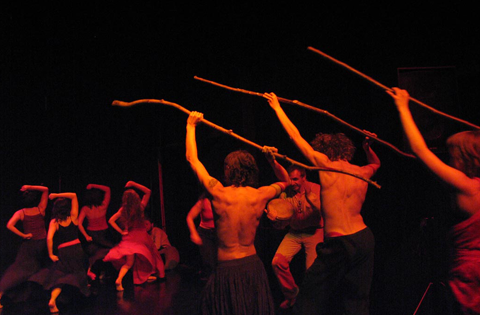 THESEUS IN THE LABYRINTH

Theatre Association „Chorea” was founded in 2004 in Gardzienice as a result of conjunction of the Ancient Orchestra and The Labyrinth Dance Formation – two artistic endeavours initiated in the Centre for Theater Practices “Gardzienice”. Its work keeps the interest in the culture of Ancient Greece and the effort of “reconstructing” the music and the dance of Ancient Greece on the basis of the musical monuments preserved in the papyruses, stalls, stone plates. The aim of the association is an implementation of the principles of ancient chorea – that is trinity of music, word and physical gesture in the process of creating theatre performance. “Theseus in the Labyrinth” is a part of the Association’s project to investigate the roots of European civilization in the context of contemporary Europe and the problems of its identity.

What is the message of the story of Theseus, Ariadne and her brother Minotaur today? Passed on by the ancients in several versions, it had overgrown with diverse comments over the centuries. For us, the significant part was to sketch, by means of dance and singing, the process of initiation practiced at the sources of the European culture. This was supposed to happen with the use of expression inspired by the Ancient culture. We felt some kind of longing for that mysterious, archaic world, so rich in its diverse and effective artistic forms.
Dorota Porowska, Elźbieata Rojek

with subtitles in Bulgarian