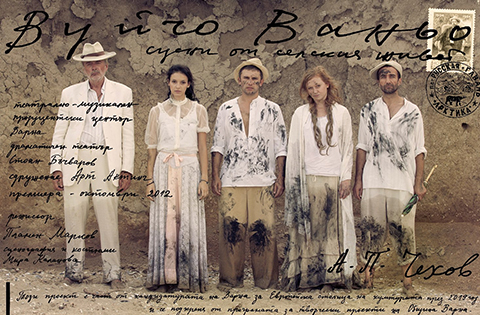 The pastoral mood of late 19th-century’s Russian countryside where time has stopped, in Chekhov-style, and has left muddy footprints in the famous “scene from rural life.” The classical play’s first ever performance in Varna is immersed in that tonality. The aging professor Serebryakov visits his estate with his younger wife Yelena Andreyevna. For all those years the estate has been managed for him by Voynitsky (Uncle Vanya) together with Sonya, Serebryakov’s daughter from an earlier marriage. In his hopeless existence Uncle Vanya and the local doctor Astrov are carried away by Yelena Andreyevna’s beauty. Everything seems lost when the Professor announces his intent to sell the estate… An unusual and fascinating performance. “Ikar” Award of the Union of Bulgarian Actors for best actress in a leading role – Gergana Pletnyova Nomination for the “Askeer” Award for rising star – Gergana Pletnyova.