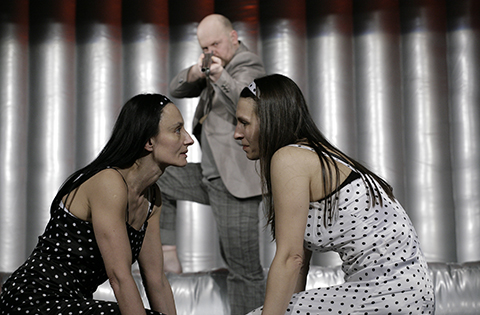 SMALL CITY THEATRE “OFF THE CHANEL”

Javor Gardev is one of the most original Bulgarian theatre directors. Having worked on various plays and authors, his work manifests an ongoing attention towards the contemporary Russian drama as well: ...as an adept for the radical openness of cultures I am convinced that  East European cultures can only gain from cultivating their closeness. (Javor Gardev). After having staged plays by Olya Muhina, Alexei Shipenko and Oleg Bogaev, introducing them on Bulgarian stage, now he turns to Ivan Viripaev.

Ivan Viripaev is a play- and scriptwriter, performer, theatre and movie director. His play Oxygen is regarded as a manifesto of the new generation in Russia and as one of the most contemporary and innovative theatre phenomena. Viripaev is author of 6 texts for theatre, presented and awarded at many national and international theatre festivals. For Valentine’s day he receives the Presidential Council award for Contribution to the national literature.

The play is like a PS to the socialist tragedy Valentin and Valentina by Michail Roshchin set in the 70s. The story of Roschin’s teenagers is continued to the future 2012 and is turned into a melodramatic farce with emotional and ironical contemporary language. The unusual structure of the play made of fragments plays with the time between past and future, as well as with different realities of dreams, memories and real life, skillfully composed.

Javor Gardev situates the action in an abstract inflatable room – the terrain where years and memories freely intersect. In a well mastered mixture of the ironic and the dramatic the actors energetically perform this hearty and very emotional play about love, as the director describes it.