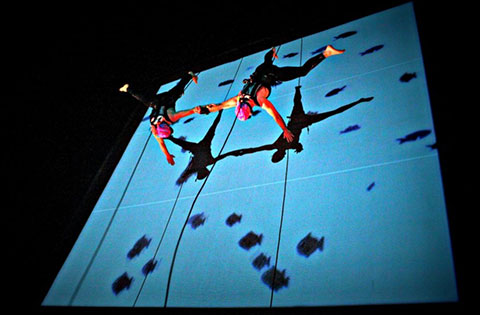 “Wanted” is an attractive show in the genre of aerial physical theatre in which two actors-acrobats are involved into a world of comics and animated films projected on a screen on the façade of the main building of the Drama Theatre. On this vertical stage they perform a criminal plot in a play about an adventurous trip teetering between the fictitious nature of animated drawings and the pseudo-reality of a computer screen. A cop and a thief traverse the globe in an unprecedented run – they jump over skyscrapers and tunnel their way to safes! A computer turns itself into a character, intervening and interacting with the two heroes by various titles and graphics on the screen, and they are ever more resembling the 1980’s videogame characters.

eVenti Verticali Company was founded in 2006 by the brothers Luca and Andrea Piallini who decided to unite their skills in theater, circus and acrobatics. Thus they have specialized into aerial physical theater using various vertical surfaces in urban areas. In their shows, the company combines various art forms – theater, circus, graphics, animation, visual comedy, new technologies music and dance. Since its founding the company has performed in over twenty countries all over the world,