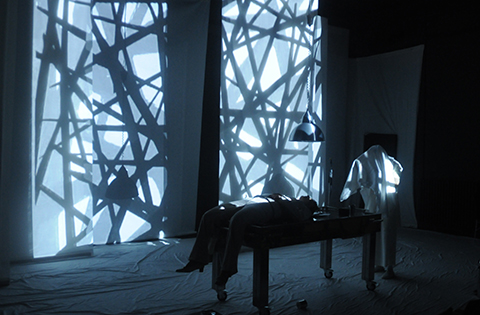 WOMAN AS A BATTLEFIELD

A Bulgarian director stages in a Macedonian theatre a play by a Romanian playwright which examines the situation on the Balkans at the end of XX century. Various viewpoints clash in this theatre production, which resembles a documentary about a time not long ago when war was fought and humanity challenged. The complexities of the epoch are seen through the lenses of two women’s fate and psychology.
The France based Romanian playwright Matej Visnjek wrote the play “Woman as a Battlefield” in 2000. It tells about the American Kate and the Bosnian Dora who meet in a hospital in Germany. A confrontation arises that reveals aspects of the emotional and personal story of a person as independent individuality and as an ethical subject in the times of communities conflicts that has not been overcome. The Bulgarian director Vladlen Alexandrov creates a multilayered context of the action putting it under observation of video cameras and embracing it with documentary images of the war. In the “Woman as a Battlefield” he searches those supporting points that oppose destruction and annihilation through their constructive opposites.
„Woman as a mother… woman as a lover… woman as a scream… woman as a cry… woman as an experiment… woman as a river… woman as a sea of emotions… woman as a broken mirror… woman as truth… woman as a battlefield.”
Vladlen Alexandrov