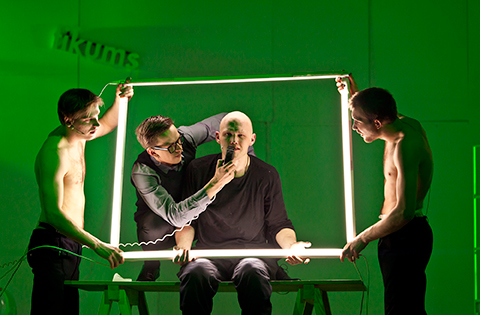 Russian director Kirill Serebrennikov offers an original interpretation of one of the most enigmatic plays in modern European drama, Georg Büchner’s “Woyzeck”, which he wrote when he was only 24 years old. In it, the action takes place in a military barracks in the 19th century and it tells the story about a young soldier Woyzeck, who has to earn extra money by undergoing a medical experiment. Driven by despair and jealousy, he eventually kills his beloved Marie. For over 200 years, the play has challenged the theatrical language of many directors with its fragmentary composition and internal intensity.

In the version of Kirill Serebrennikov, Woyzeck works at a contemporary art gallery where he becomes subjected to an experiment set to reveal the limits of human potential. Woyzeck’s story is staged as story of the transformation of man into a kind of artefact. With the recording of this production on the stage of the National Theater in Riga, the Bulgarian audiences will have the opportunity for the first time to get acquainted with the work of one of the leading Russian theater directors with world fame.

Latvian Theatre Award 2011/2012 Nominations for production of the year, director of the year and best actor in a supporting role (Uldis Dumpis)