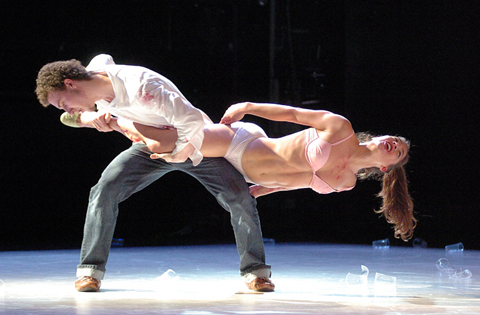 Compagnie Linga was founded in 1992 by the choreographers Katarzyna Gdaniec and Marco Cantalupo and since 1993 its international troupe has been resident at the Octogone Theatre in Pully / Lausanne. Its name comes from a symbol of fertility in the Hinduist religion. Linga’s impressive style brings together the dance in the rhythm of deep respirations of interacted bodies and the breathtaking acrobat-like acts. The company’s last works are engaged with political statements on burning issues of contemporary life. “Wrap me up” is Linga’s newest performance and it explores with humor and critical attitude the consumer society, dominated by the ideology of the advertising industry and its strategies of “seducing”.

“Advertising, this disproportionate social phenomenon, reveals a cynical idea, which transforms the world into merchandise. The message, constantly repeated, is clear: consumption is the solution to all problems. Merchandise is the center and the meaning of life, the (super) market its temple… “Emballe – moi” (Wrap me up) explores the condition of mankind to this dominant ideology – in an urge of a change”
Katarzyna Gdaniec and Marco Cantalupo

The production is supported by the Canton of Vaud, the City of Lausanne, Pro Helvetia – Swiss Foundation fur Culture, Migros Pour-cent culturel, the Banque Cantonale Vaudoise.

The guest performance of the troupe is realized with the support of:
Pro Helvetia – Swiss Foundation fur Culture