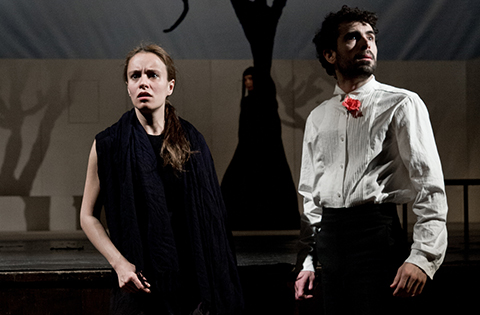 “Yerma” (i.e. “barren” in Spanish) by Federico García Lorca is one of the most famous works of modern Spanish drama. The author himself described it as “a tragic poem.” In an electrified symbolic language, it tells the dramatic story of a young woman, Yerma (Radina Kardzhilova). Married to obey her father’s will Yerma accepted her fate to spend her life with a man (Veselin Anchev) she does not love and her only solace is the hope that one day she will have a child and secure a better future for it. That day, however, never comes. Her despair turns into an obsession that ultimately drives her to a terrible crime. Through Yerma’s state of mind the director Diana Dobreva poses the general problem of desire. “Whatever we do, whatever we have in life, we want something more, something we don’t have, something that’s not here. There is some black hole in ourselves that we should fill with desires and hopes however, it seems we will never manage to fill it up,” she says. The performance builds up a ghostly, mystic and eerie world carrying director Diana Dobreva’s signature: bright visual imagery, enthralling music and fine acting.
Grand Prix at the 8th International Theatre Festival Skupi, 2014, Skopje, Macedonia